With Oceania squad fast approaching, I thought it’d be a good idea to get some experiences up on the blog for us to enjoy! But especially for the newbies in the team. Bonny and I don’t want to be the only ones to write on here, we want it to be a one stop shop for lots of different ideas and stories for New Zealand skaters! (and maybe in the future some overseas skaters as well!) So to start us off, I asked my sister Mercedes to write a little about her first Oceania experience. Hope you enjoy!

My first Oceania competition was last year (2014). I competed in Cadet Solo Dance.

The Oceania squad was quiet for me because I was only in one event so I only skated a little bit. There was heaps of off skate work. We did fitness testing (like how many shuttle runs you can do in 10 minutes) so we could see how much we improve over time. I didn’t like doing it at the squad because I pushed myself hard to get the best result then I had to skate for the rest of the weekend.

I stayed at the Lupton’s house with Hannah Calderon. We learnt about drug testing at the squad and some warm up exercises to do before competitions. I also got a taste for what Oceanias was going to be like. By the end of the squad I was very tired and had made some new friends.

Leading up to Oceanias, I don’t think I did any off skate training. My on skate trainings were filled with heaps of routines/rounds of dance where I tried to perform as if I was at the competition. I only stretched 3 times a week after skating training. This year I’m also doing Macarena’s 12 week guide, which includes workouts on arms/back, legs/butt and abs. I’m now stretching up to 6 times a week, every time after skating and after a workout.

I thought Oceanias was going to be more busy and scary, but I actually had a lot of free time but that is probably because I only competed in one event. This year will be the complete opposite. I’m in 3 events so I’m worried I’ll be too busy and not have much time for friends or myself. Before Oceanias, I thought there would be more Australians and that our teams would mix and hang out together. I watched the Oceanias in Auckland (2012) and I saw that the aussies and kiwis were sitting together so that’s what I expected last year. This year I hope to speak to more aussies because last year I only talked to them at the social.

My warm up for my event was simple. I ran around for a bit, did some star jumps to get warm and then went through my dances/routines. I visualised my freedance with my music on my iPod and just imagined the music for dance and performed it off skates. In between my dances I took my skates off and did off skates in the corner, trying to keep warm. This year, I will add the warm up Hugo taught us at his squad and try to make it longer, or start warming up later as I had too much time before I skated and I didn’t know what to do. This year I’m also warming up for every training like I would for a competition. This way, I know how I’m going to warm up on the day instead of deciding what to do on the day and then not knowing how I’ll feel once I’m on skates.

Performing at my first Oceas felt really good. It was a new crowd that I’d never skated in front of so it was scarier than usual. I was so nervous going onto the floor and before that but after a few seconds of the music I started to relax and really enjoy it. I was super happy with my results as I came first in cadet solo dance.

This year I’m really looking forward to performing in dance, free and precision. But I’m probably most excited for freedance and precision because they’re so much fun to skate. I’m also looking forward to seeing Australia in general as I’ve never been there. This Oceas, my results oriented goals are to get in the top half of the free grade, top 3 in dance and first in precision.

I’m really excited for this Oceas! I can’t wait to see all the other skaters!

Do you have any ideas, stories, tips, recipes or anything else you’d like to share with the rest of New Zealand’s skaters? Get in contact with us for the chance to feature on our blog at info@heymacarena.co.nz 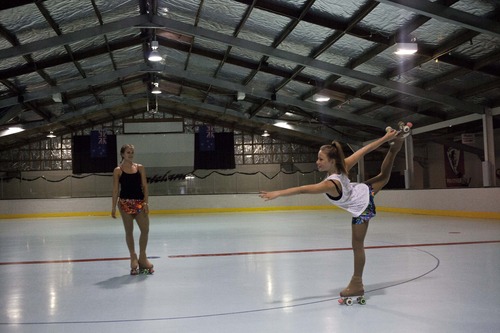