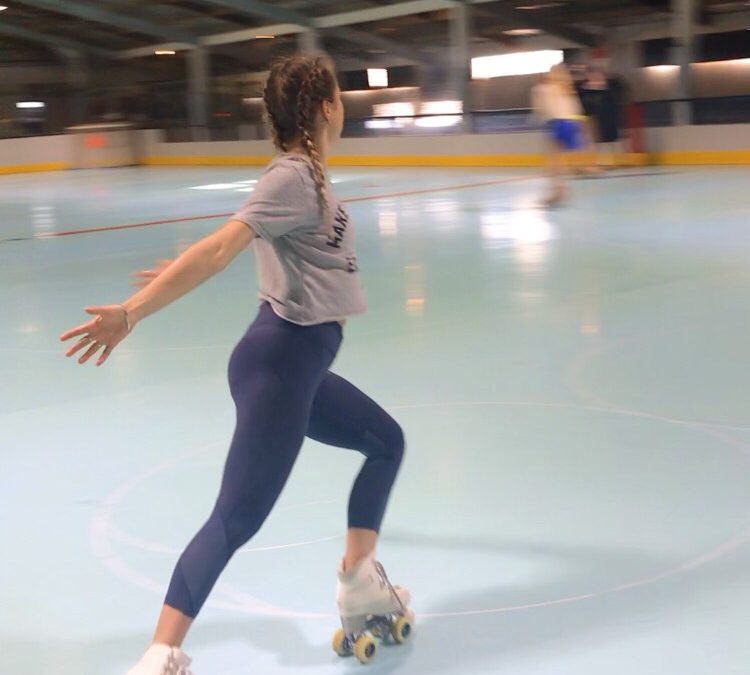 As long as I can remember, all I’ve ever wanted to do was to compete at the World Championships. That was THE goal. My dream came true in 2011. I represented New Zealand for the first time at just 17 years old. I remember standing at the marshalling area with my coach before stepping out on the floor for the first time. I looked at her and suddenly realised I had done it. We did it. My childhood dream was my reality. Still to this day, that moment holds a special place in my heart. Brazil was the experience we all hope for. I skated a personal best and felt proud of myself. That’s all I could ever ask for as an athlete.

The following year, I represented NZ in my hometown, Auckland. Another highlight of my skating career. Nothing compares to watching world champions compete on the floor you regularly train on. It felt so surreal to come out with a 7th place of 15 skaters. A huge improvement from the previous year. 2012 was also my first year at the University of Auckland. And while I loved the training, it took its toll. I was training way too hard and not eating enough. I was very fit but it was not sustainable. I was overdue for a crash. I was driving myself into the ground without even realising it. That year, I failed one of my papers. Partly because I had to take nearly 2 weeks off to compete at worlds in the middle of the semester and partly because I didn’t know how to study. It was a rude awakening but not enough because I continued to train and study full time.

Sometime during 2011-2012, I developed a tendinopathy in my extensor ankle muscles. It was never diagnosed because I didn’t do anything about it. I was constantly feeling pain every time I skated but I kept training through it. In 2013, I was training harder than ever despite the pain and under eating. Not an equation for success. I was simply not recovering from my training. I went to Taipei to once again represent my country and compete at worlds. This time, the competition fell right in the middle of exam period. So not only did I have to compete and deal with that stress, I also had to sit an exam while I was overseas. I was stressed, over trained, still in pain and feeling over it. Uni was much harder than I had expected and I was trying to keep up with full time study on top of everything else. I was feeling so overwhelmed at the time.

So during freedance official practice at Worlds 2013, I sprained my ankle. It’s gonna sound dramatic but it was like my life flashed before my eyes. I was devastated. I had been working all year (and life) for this moment only for it to be taken away. In hindsight, I realise that it was bound to happen and I’m lucky I even made it to Taipei because I was in so much pain all the time. My feet and ankles were constantly swollen. I wasn’t even able to walk without pain so it was no surprise. Something had to give. At the time though, I couldn’t see that. I was just frustrated that this was happening to me. In typical teenage fashion I was stuck with the thought of “why me”. But of course, it’s me we’re talking about and I was not about to give up so I still went out there and skated my freedance on a sprained ankle on swollen, painful ankles. I can’t even remember what it was like. I just remember it hurt. A lot. It was not the performance I wanted or felt I deserved. I was left frustrated and angry that my body had let me down.

And now we come to the crashing and burning. My body was so done with me. The tendinopathy was so bad I could hardly walk. I had to stop all exercise for a few months and I definitely didn’t skate for at least 6 months. You can imagine the toll this took on my mind. For someone with difficulty around food, being forced to slow down was stressful. It was hard. I had to face who I was without skating (so dramatic but I was 19, ok). I had never stopped skating for that long since I had started when I was 4. But of course, that was part of the problem; I had never taken a break. Over the summer of 2013-2014, I sprained my ankle at least once a month just walking down the street. I suffered 6 ankle sprains. 4 on my left ankle and at least 2 on the right. I saw countless physios to try fix what was wrong with me. In the end, deep tissue massage was my saviour. I got a massage every 3 weeks for a year. I skipped most competitions in 2014, including Oceanias which I had been going to since 2008. I slowly fixed my eating habits and learnt to eat properly. I hardly skated for a year and I finally allowed my body to recover from the previous years of abuse.

Looking back, I don’t think I wanted to go to worlds in 2013. I think I only went because that was what was expected and I was already used to training hard so I just kept going. I don’t regret going because I learnt so much about what it means to be burnt out and unhealthy. It took me so long to get over that performance. I’ve talked about mourning a performance before, well it took nearly 3 years to get over this one. In 2013, I swore I was never going back to worlds. But I think what I meant was that I was never going back to that mindset. The mindset where training through pain was necessary and expected, that eating less is best and that strength means being able to control everything around you.

Since 2013, I finished my bachelors degree in psychology and sport science (how ironic that I was studying how NOT to over train while I was overtraining); I learnt to fall in love with skating again by taking a break. 2016 and 2017 were the cruisiest years and I both loved and needed them to be that way. It was the break I needed as I learnt to look after my body and train in a sustainable way. I explored meditation, yoga, journaling and various other resources I use to look after myself. Including a long list of podcasts I religiously listen to (I love my gurus), instagram people who inspire and share a positive message and a solid crew of people who are supportive of my goals.

I achieved so many other goals outside of my own skating last year. I am currently coaching 11 amazing skaters. I ran a half marathon in under 2 hours which is something I thought I would never be able to do because “I wasn’t a runner” (lol). I actually take my own advice about training now (most of the time). I know my triggers and how to recognise when I’m going back to old ways of thinking. I am stronger and more self aware now than in the past. But I wouldn’t have what I have today without the struggle of 2013-2015. I’m grateful for what I went through in those 3 years. I overcame injury, disordered eating and self abuse. I feel like I’m finally coming back to myself and growing out of that old self all at the same time. I’m confident and love what I do for the pure love and joy of it.

Previously, thinking about competing at worlds again had me feeling sick with dread and feeling anxious but something in the last couple of months has changed. I’m feeling ready to kick ass more than ever and thinking about the training no longer overwhelms me or stresses me out. It only excites me and lights up that fire I thought I had lost. Which is why I have finally decided on my next goal…

I’m ready to go back to Worlds.