Rolling with it – By Zoe Hallett 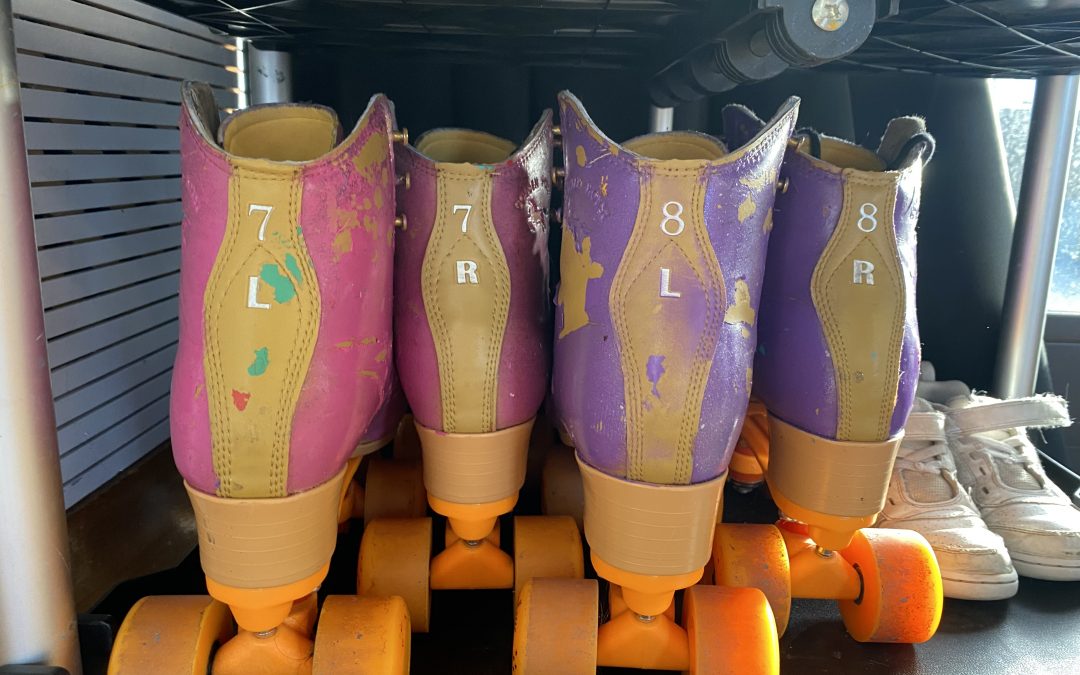 I was recently approached by Zoe Hallett who wanted to write a profile about me for her uni project. I was very surprised I was interesting enough to write about! But if you know me, you know the one thing I’m great at is talking about myself. Poor Zoe had to sit through an hour of me word vomiting about my life! Anyway,  here’s what she wrote for me…

Macarena Carrascosa has skated her way around the world on a journey of self-discovery and has come back to her home in Auckland, to inspire others.

Macarena Carrascosa arrives at class, pushing a trolley of skates, and she greets those she knows by name. She greets newcomers in a friendly way and makes them feel at ease. Eager chatter fills the air, and they catch up on the progress they have made since the week prior. 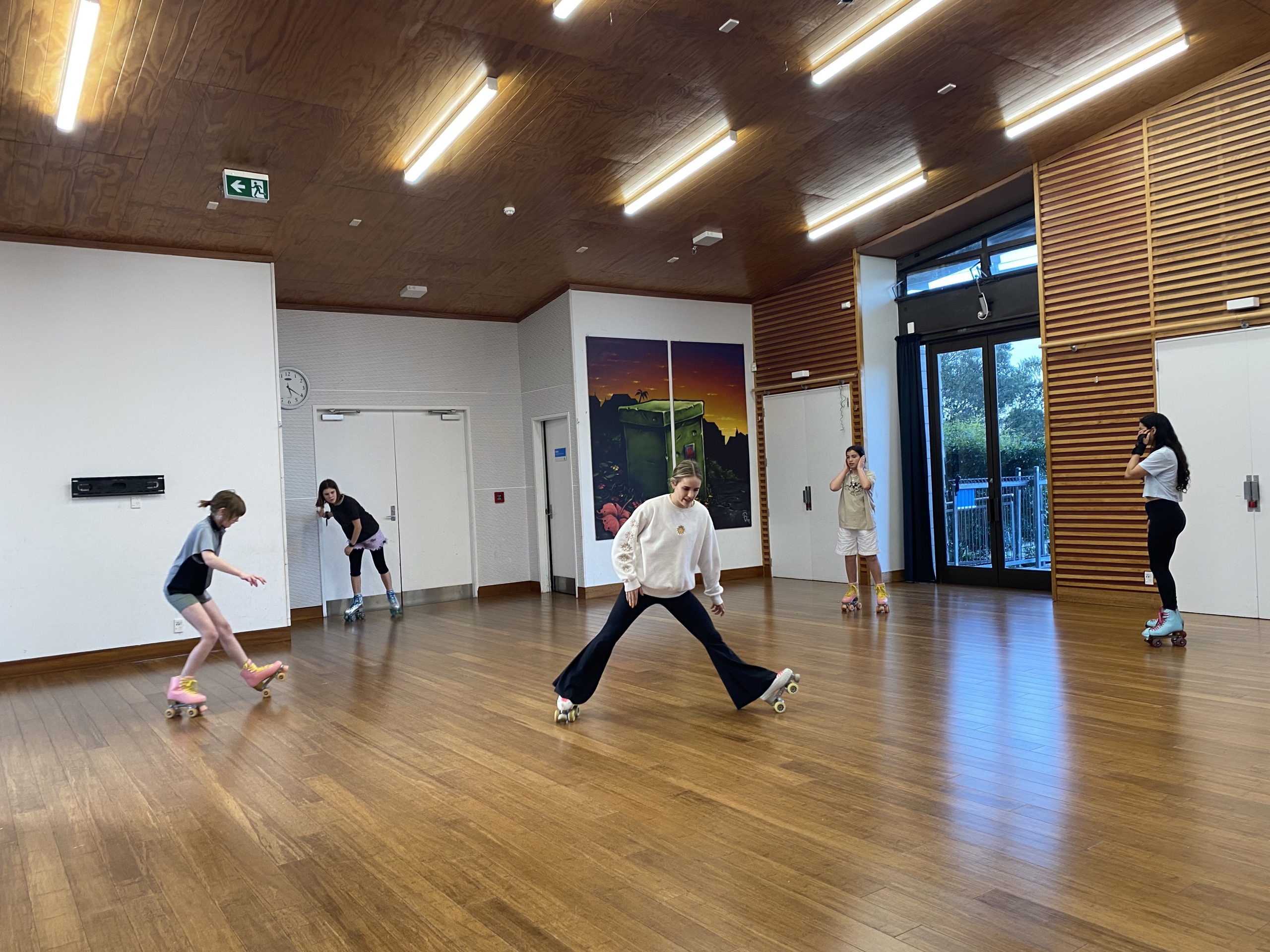 Beginning her classes wasn’t always this natural. Her husband and mother used to attend them so she wasn’t met with an empty room. These days, her mum and partner would struggle to attend a class due to the popularity they have. During the class, there is no judgement, Mac breezes around the hall teaching everyone at the level they are
comfortable with.

Watching Mac glide around the room in her skates, she is the picture of poise and serenity. Her skates become an extension of her body, and she appears to almost float across the floor. This contradicts her chaotic schedule and she is otherwise on the go all the time. Her Google calendar is her guide, and she refers to it constantly.

Coaching is something which gives her instant gratification, “I ride the high of other people, when they get something good, I celebrate with them and it’s a genuine happy feeling”. Teaching gives Mac some time out from her hectic days, and she can focus solely on those who come to learn from her. She values her beginner classes immensely, as, without them, her more advanced classes wouldn’t be as popular. Beginner skater,  Alyssa Kerr, says she feels supported, unjudged and happy that she has a safe environment to learn to skate in. It is all about getting people into skating and making them want to come back, but Mac says “it’s an easy sport to sell” once people realise the fun and opportunities the sport provides.

After finishing her competing skating and returning to Auckland, Mac started up her coaching business, ‘Hey Macarena’. She wanted to help encourage new skaters, and grow the New Zealand competitive skating scene. In terms of the competitive scene for NZ roller skaters, Mac says “yes, we’re at worlds, and we get there… but we’re not winning. If we want to get anywhere, we have to have professional coaches”. After seeing the facilities available to others, especially growing up in Argentina, she wanted to share this passion and give those in New Zealand a chance to learn. It is the next step for her, and a way she can turn her passion into viable income production. Initially, Mac worked full time on reception at Glenfield Leisure Centre, an indoor sports and skating arena in Auckland. However, she has slowly been cutting down on her hours, to accommodate her flourishing business. Skating is something she loves, and although she doesn’t have as much time to skate for herself as she would like. She has a drive for ambition, and acts intending to reach the overarching goal. Even when she was training for competitions, she always did to get better “I never enjoyed the training, but I knew it would make me better”.

Discovering who she is has taken years, and she is still learning to maintain a good work-life balance. Mac grew up in Argentina, and moved to New Zealand with her family at the age of nine. This was due to the economic crash in 2001, making life in Argentina difficult and uncertain. She was destined to pursue a sport of some kind, with her dad being a keen rugby player in Buenos Aires. Her family spent every weekend at what Mac describes as “kind of like a country club, but if a country club had every sport you can imagine” ranging from rugby fields to swimming pools, and, of course, skating rinks. The streets of Argentina weren’t safe for children, and there was nowhere for them to congregate, so the sporting facility was where she spent her time. She and her friends would roam around the centre
and experiment playing different sports. Her parents didn’t have to worry about them getting lost, or wandering off, “all I needed to do was go to the rugby field to find my parents”.

By skating from age four, this quickly became a big part of her identity. After moving to Auckland, she continued to pursue it. Her parents would take her from Beach Haven to Mount Wellington once a week for training. She then began competitive skating, and went from regional competitions to National’s, Oceania’s, and World’s. She holds 11 National titles, two Oceania’s, has attended three Junior World Championships, and one Senior World Roller Games. Being this successful at such a young and impressionable age had its drawbacks, and Mac developed several injuries, unsustainable eating habits, and a bad training schedule. One of her injuries went undiagnosed for years. A repetitive sprained ankle injury highlighted a more serious ankle and calf injury, “I was studying sports science, but for some reason, I never applied any of my knowledge to myself”. After going to a physio, they noticed one off her ankles was twice the size of the other and she began a yearlong recovery period. “It was kind of the right time for me to stop, but I never really felt like I was done”. After this, she invested in a coach to help her make Worlds one last time. She had a training plan in place which ensured she trained healthily and more sustainably. Having a goal in mind helped, she says, and gave her something to work towards. “It felt good to be done, I was the fittest I’d ever been in my entire life… I was ready to do it properly and I wanted to prove to myself I could do it properly”.

Mac has experienced a range of cultures and environments, which have taught her how to prioritise. Having a comfortable home base is important to her as this is her place to relax. Because of the nature of her lifestyle, she could forever be moving from one place to another, and therefore she tries to work from home as much as possible “whenever I can be here, I am”. Her living area gives off an aura of tranquillity, from the soft pillowy couch to
the rows of plants framing the TV, to the speaker filling the air with Alanis Morrisette and Fleetwood Mac, creating her space to unwind. 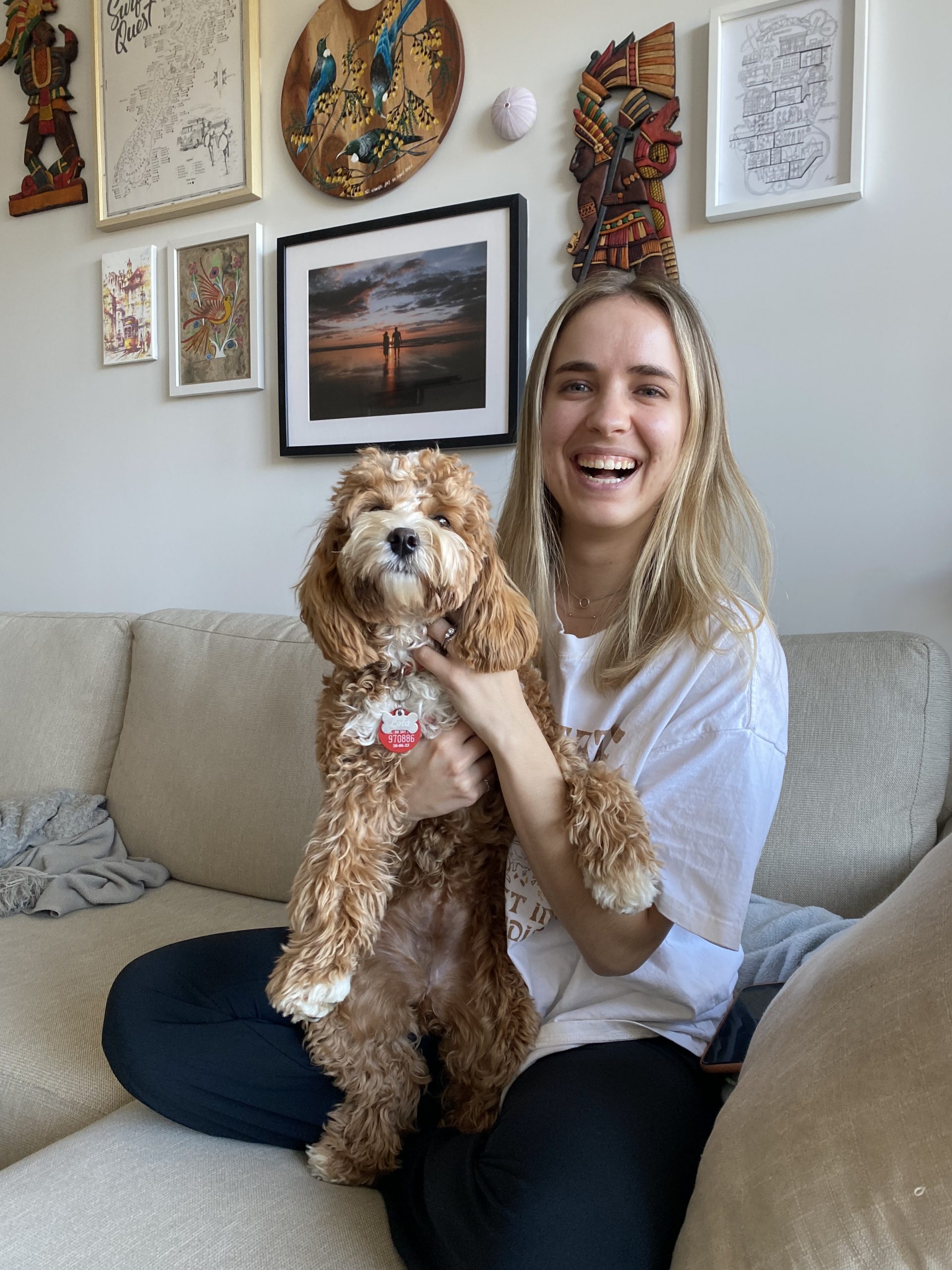 Now 27, Mac says she still feels 21. In her time off she enjoys going to bars and clubs with her friends, and every time she skates it never gets old. “When I was an athlete, unwinding was stretching and foam rolling, now, hanging out with friends is my way of unwinding. The last year has gone by in the blink of an eye, and time doesn’t seem to be slowing down any time soon. She has something every weeknight, and Saturday is her designated day off each
week. Admittedly she says she’s not the best at practicing self-care and finds it difficult to wind down. But this is something she is working on and if she isn’t out socialising, a quiet night at home is just as appealing. Lola, her 8-month-old puppy, helps her destress, and has regular play dates with the puppy in the apartment upstairs.

Like anything, skating is an investment in time, skill, and money. Mac says it’s currently being treated like a trend, and this can be frustrating for people who are serious about the sport. Mac has spent years refining her skills, and this is sometimes brushed off by people because of the fast-paced view society has today. Skating is bringing people together, with several new skating groups popping up in the city and around the country. There are so many avenues and directions participants can take, once they know the basics, the possibilities seem endless. Mac says a lot of interest in the sport has come from social media trends, however says “I’ve spent my entire life teaching people to love being on wheels, and I don’t want the success to be put down to a fad, because that means it’s going out of style, and I don’t want it to”. 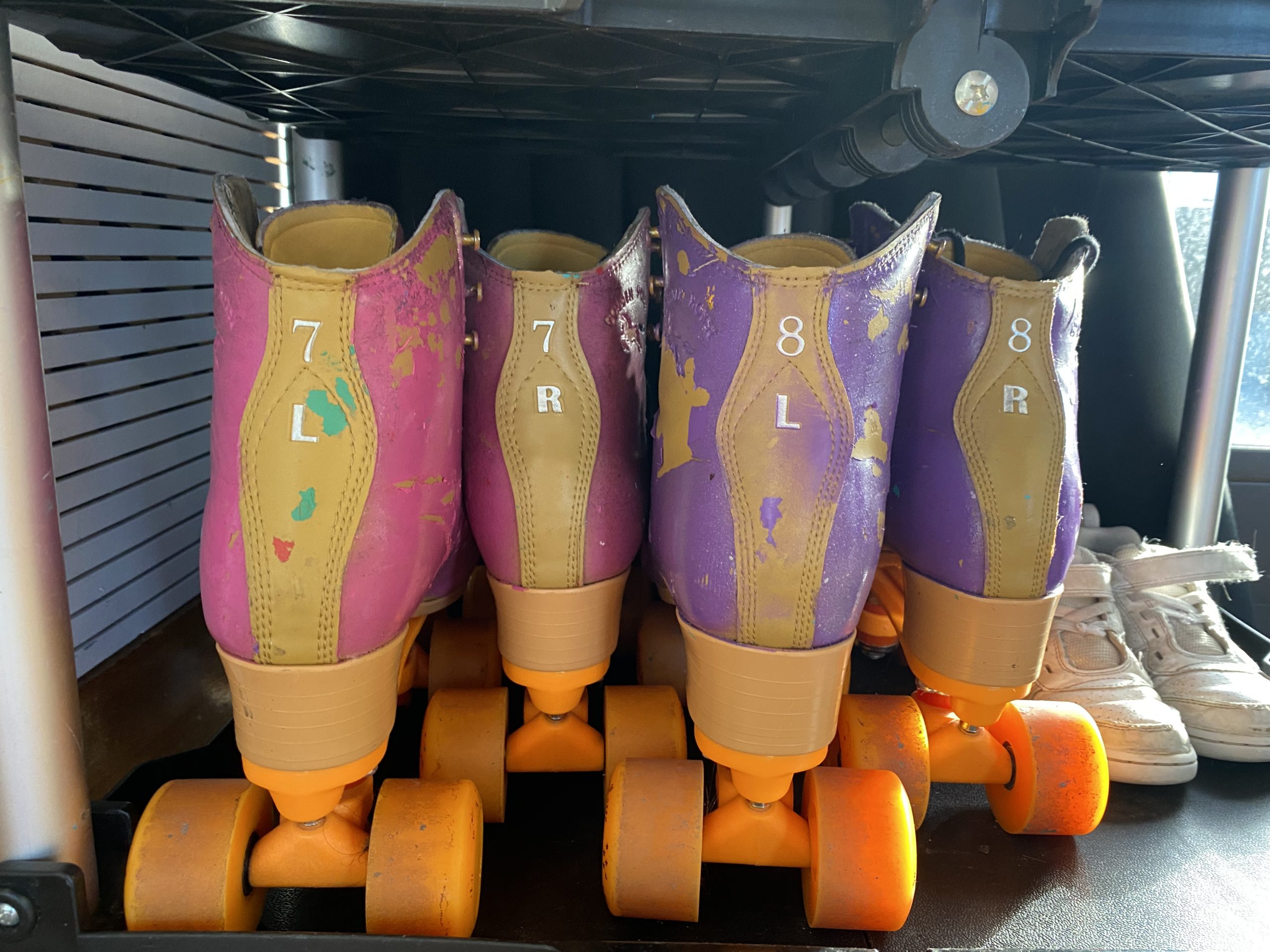